The quotation below, attributed to Abdal Hakim Murad (Tim Winter), is currently being shared far and wide on social media: 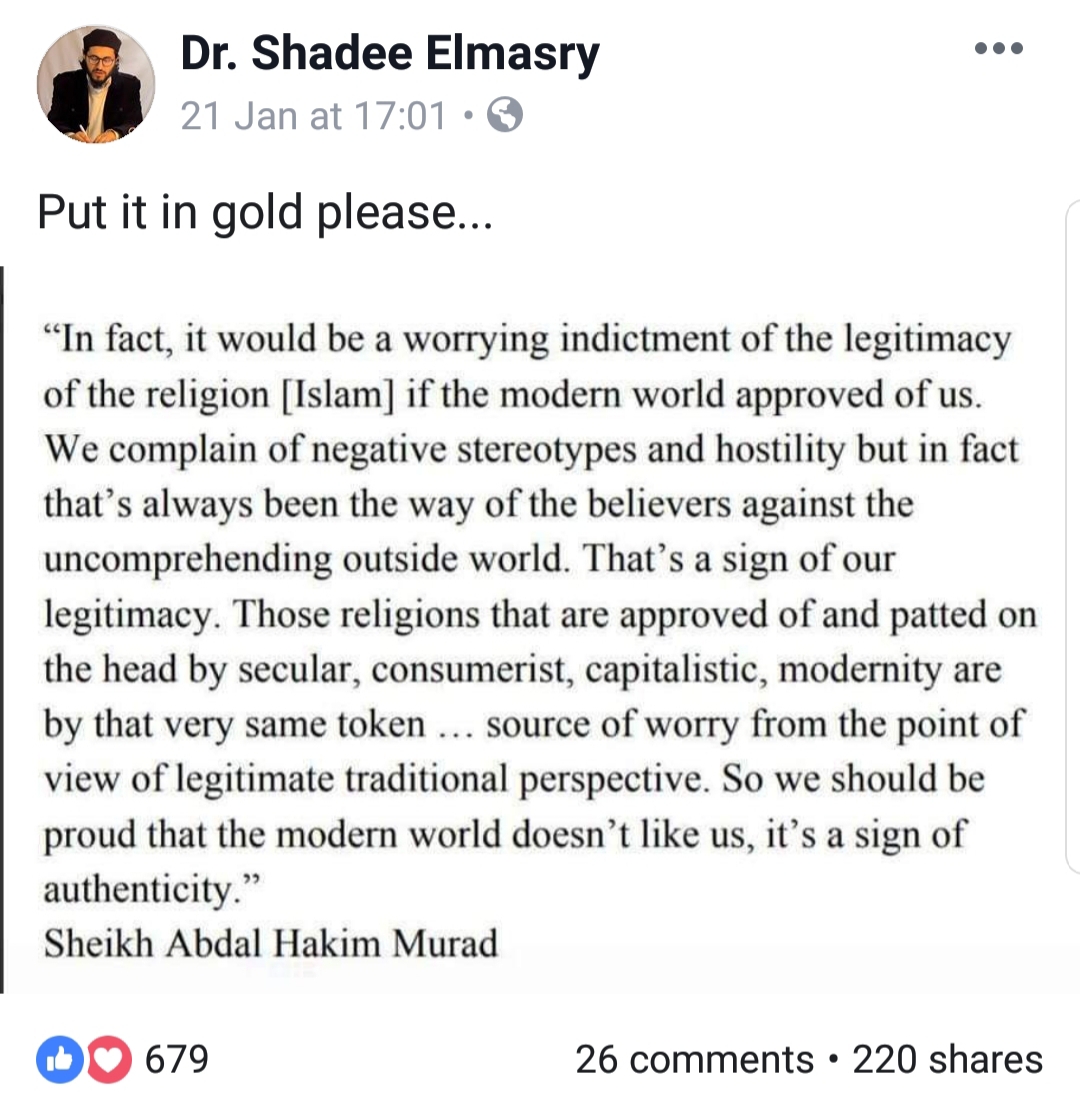 The first time I came across it, I thought to myself: “Is this really true?”

The second time I came across it, I thought to myself: I really ought to check that my esteemed namesake really did write this.

Easier said than done, because although quoted all over the place, in both public and private social media posts, we’re very poor at quoting our sources. A little probing later, I found that the intellectual was indeed the author of these words, uttering them during a recording found on YouTube entitled, Reliance on Allah: The Cure For An Ummah in Crisis.

These were not words spoken in isolation, however, to be brandished as a weapon as now utilised online, but a preface to remarks spanning an hour. As soon becomes clear, the transcription turned into a politicised meme has been hewn of its context, to be given meanings diametrically opposed to what was intended.

Missing at the end of the transcription above: “Nonetheless…”

Nonetheless, it’s also the case that Muslims when they view this incomprehension — hostility — from the outside world, don’t find solace in the traditional virtue of rida in the way that often we did. We find forms of agitation, we find insecurity and the necessary consequence of that, which instead of being so relaxed, that we’re forgiving and inclusive, and we see the best in everybody, we increasingly judge, because the slightest difference between ourselves and the doctrine or the practice of another Muslim somehow makes us feel even more insecure. We want the religion to be an oasis of monolithic consistency that gratifies our sense of insecurity.

Now that’s very dangerous for communities, because the religion itself is supposed to provide a sense of absolute, constant assurance, and relaxation and serenity that everything that happens is by the will of Allah subhanahu wa ta’ala. This is at the core of the Quranic message. It’s a necessary consequence of tawhid, that Allah is not just the one who winds up the cosmic clock at the beginning of creation, like an eighteen century deistic god, and just lets it happen, so we have to be profoundly agitated by the vicissitudes of time. Allah is the one who is not just al khaliq, but also al khalaq. He is the one who is constantly creating it. Every moment, there is nothing that is not the direct consequence of the divine power.

If only those demagogues brandishing part of what the wise one said would listen to and reflect on the passage in its proper context.

This virtue of rida, historically created Muslim communities whose visitors were always struck by the sense of contentment and serene resigned acceptance of Allah’s decree. And the fact that this is slipping away from us, even though so many other aspects of Islam seem to be prominent or even coming back to us, is I think something that we need to think about, because it’s an impugning and compromising of our tawhid to suggest that what is happening in today’s world is not the direct will of Allah subhanahu wa ta’ala.

Isn’t it ironic that many of those sharing an image of words spoken are themselves foremost in the camp of the agitated, perpetually raging against the times and those they consider backsliders, whose Muslimness must forever be questioned?

I have always been taught that the true believer is a man of his time, living in the moment he was born into by the grace of God. We are not called to recreate a quaint, imagined past, however much we might yearn for it. If only we could move beyond mere soundbites and what is easily digested and shared on social media; who of those sharing words on the web will give an hour of their time to listen to them in their true context, and reflect on them deeply.

One thought on “Nonetheless”

This site uses Akismet to reduce spam. Learn how your comment data is processed.